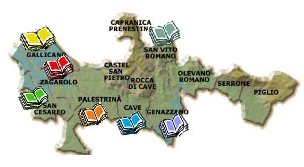 The Sistema Bibliotecario dei Monti Prenestini is a joint system of libraries run by Comunità Montana Castelli Romani-Prenestini. The System was founded in March 2003 under an agreement between the then Mayors of the six founding Municipalities: Cave, Gallicano nel Lazio, Genazzano, Palestrina, San Cesareo and Zagarolo.

The agreement was but the final deed in a time-consuming negotiation, with the six Municipalities engaged in extensive talks in the attempt to achieve a shared view of the roles that the new organisation would have played. It was instantly clear that “partnership” was the operative word.

As a matter of fact, the System was based in principle on a technical as well as “political” partnership between the libraries and the sharing of the resources of every single facility. From this perspective, the first step made by the System was to try and find more partnership opportunities, with the help of Sistema Bibliotecario dei Castelli Romani, whose established experience turned out to be extremely valuable, saving time and getting the help needed to move on quickly.

First, an electronic catalogue of the books of each library was developedso as to have a powerful tool to monitor and track the books of the System. The development of the catalogue went on very quickly, with the assistance of the librarians of the Municipalities who willingly helped with this job, first by attending a massive refresher course on the use of the SE.BI.NA. software, and then by working fervently at the development of the new databank. Such work did not take long to bear its fruit and nowadays, just three years after its development, the electronic catalogue of Monti Prenestini is a reality, enabling users to have access to a group of over 35,000 volumes.

Also from the perspective of partnership, and since the libraries shared the same view of their “mission”, a view in which they are not just the guardians or lenders of books but also the promoters of cultural events, the first public readings were launched in 2004. The initiative had been designed to bring children closer to the world of reading, so the System organised a cycle of meetings in primary schools, where a professional actress read fairy tales and acted out the highlights. The initiative was such a hit that the System was persuaded to repeat it and turn it into a regular yearly event, which was unfailingly repeated for the third time in 2007.

Other events were launched, such as La sfida della differenza in 2006, a cycle of meetings with six authors presenting their works: Concepire l’Infinito by various authors, presented by one of the authors, Federica Giardini; Guerra e Democrazia by Marco Bascetta, Identità femminili in formazione by Margarete Durst; Filosofia dell’ambiente by Serenella Iovino; Ladri di geni by Gianni Tamino, and Vivere in nicchia e pensare globale by Luigi Sertorio.

So we arrive at the present situation, with the definitely satisfactory outcome of the first four years in the life of the System: a soon-to-be-completed electronic catalogue to make all the books of the System, estimated at over 50,000 volumes, accessible to users as soon as possible; several cultural events that have by now become a regular date for the residents of the Prenestina; an official website that is increasingly turning into the informative “voice” of the System.

We can feel rightly proud, but certainly not completely satisfied. And, in fact, new events are being launched. First and foremost, from the perspective of continuous growth, the library of the Municipality of San Vito Romano has joined the System at last, thus raising the number of its members from six to seven, with all the advantages such a partnership will involve, while the start of the inter-library loan service has just recently been announced, so that the users of the Prenestina will have access to the books of the System without having to go and collect them from the library which keeps them but having them delivered to their local library.

As you can see a lot has been done in a short time and, reassured by these first results, we hope we can do much more in the years to come, confiding in the unfailing support of the Community we serve, a support that has never failed us so far.